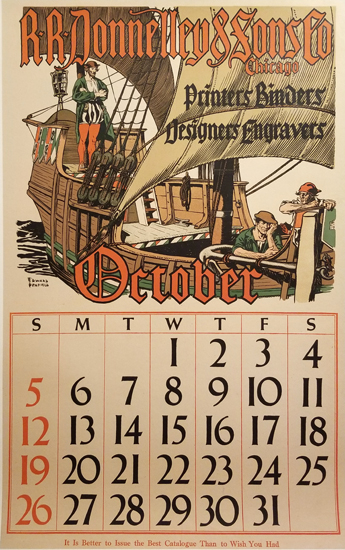 Penfield Calendar- October (1 from a set of 4)

Part of a 4 calendar set. (Sold as a set only). R.R. Donnelley & Sons got its start at the end of the Civil War as a cartography and map-making company. It steadily grew through acquisitions, and in the 1910s, it opened a printing plant in Calumet, Illinois, just outside Chicago, where this commemorative calendar by Penfield was presumably printed. The illustrations on the four pages are unmistakable examples of Penfield's late style, with more rough cross-hatching than his earlier work for Harper's. Each illustration delivers the character of the month in perfect Americana terms: Colonial soldiers firing a field-gun in July; apple-picking in September; some less-than-jolly pirates for October; turkey and trimmings for November.