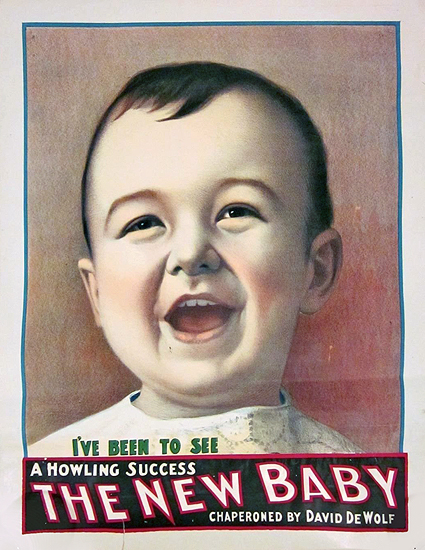 An original vintage vaudeville theater poster. "I've been to see a howling success, The New Baby, chaperoned by David deWolf". The plot concerns a husband who is so bored with country life that he dreams up the idea of having an illegitimate son in London as a way to get into town for an occasional 'night off'. When his wife decides that the child should be adopted, the expected comic tissue of falsehoods and misunderstandings frays and hilarity ensues. Adapted from German by A. Bourchier, the farce opened in London in 1896 to what a local critic termed 'much mirth'. Several years later, when the play had crossed the Atlantic and entered the repertory of David de Wolf - cleverly called the Baby's 'chaperone' on the poster - and his troupe of travelling players, that understated review was translated into the more American 'howling success'.